I was in a town where dangerous, wild animals roamed the street hunting for prey – well there were some pigs, cows and donkeys rummaging through the bins anyway.

This was also a town where the chef’s have a sense of humour. 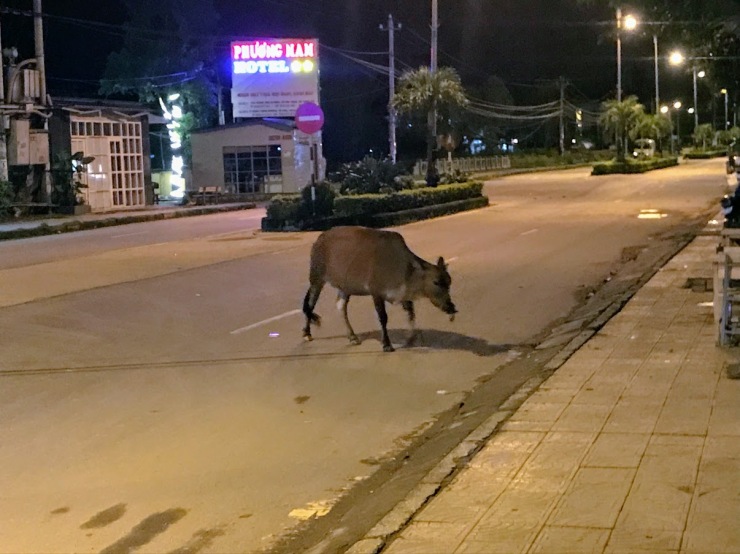 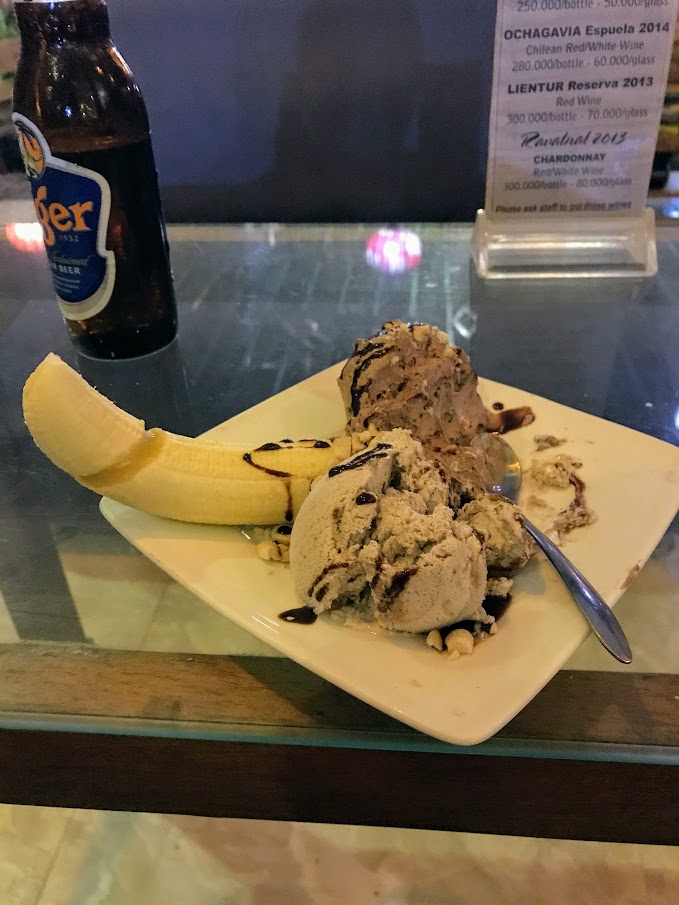 On my way South, I had decided to take a two-day stop at Phong Nha-Ke Bang National Park staying in a small town called Son Trach. The area is supposed to have amazing scenery and is especially famous for its caves. The park is actually home to the largest cave in the world, known as Hang Song Doon. Unfortunately, you have to book nearly a year in advance to visit that cave and it costs US$3,000 for the privilege which actually consists of a 1 week expedition into the cave which only one company has a licence to run. Thankfully, there were quite a few other large caves in the area to visit.

I was only there for a short time and the park was huge so I decided a tour would be the best option to see some of the main sites. Although I am not usually into tours and tend to prefer exploring new places myself, as a Solo Traveller I have found myself signing up to a few tours in Vietnam for a few reasons  – firstly, they are very inexpensive (I mean I am talking the price of a few beers in Jersey!). Secondly, as I am not staying in hostel dorms, I am finding it is a great way to meet a few people and you can share the experiences with the other travellers on the tour and maybe find someone to go for a beer with in the evening. Thirdly you get to learn a bit about the place and finally I don’t have my own transport so I need someone to take me around! I am not going to do them ALL the time but will do the odd one if it has good reviews.

Anyway, I signed up to a one day tour to visit two caves which also included zip lining, trekking and kayaking which cost me about £23. Oh and that includes lunch

First stop of the day was a visit to the “botanical gardens”. When she said “botanical gardens” I must say I was expecting a pretty little garden where people would be sitting around drinking tea or feeding the ducks. Instead, we went on a treacherous trek through thick jungle to a waterfall and sheer drops all around. Views from the waterfall were stunning. 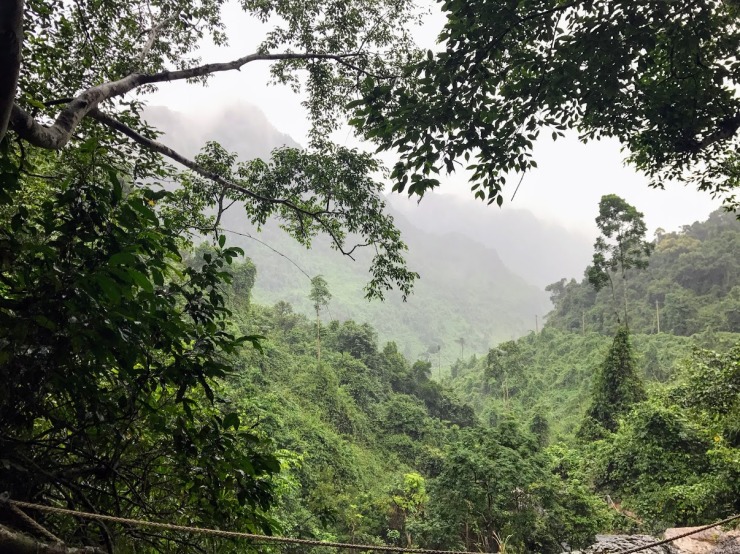 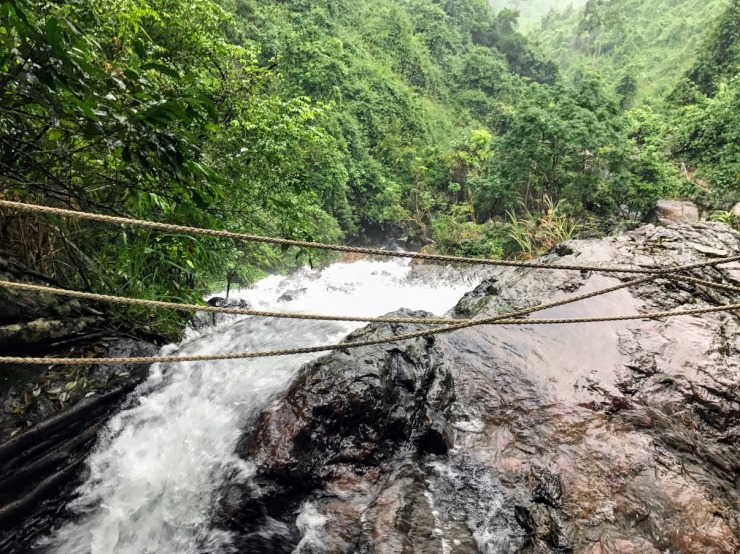 After that, we made our way to Paradise Cave. On the way, our guide told us the story about how the cave was discovered by a local man in 2005. He was out on a hunting expedition one night and when he made camp he heard the wind whistling in the cave. He went up to have a look but as it was so dark he didn’t venture too far inside but reported it when he got back home. British Explorers then visited the cave and discovered its sheer size – 31 kilometres deep. A section of the cave was opened to tourists in 2010.

The photos don’t really do the cave justice and show its enormity. I mean it was HUGE. You could probably fit several shopping malls or even a large Airport such as Gatwick in there. We were told we had an hour to explore it and we needed it, it took half an hour to walk to the end of the section that was open to tourists. It was pretty incredible that this place had only been discovered in 2005. 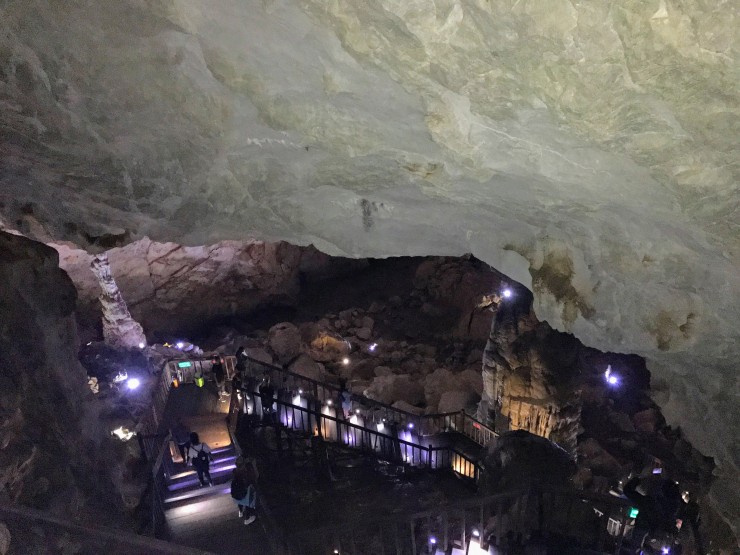 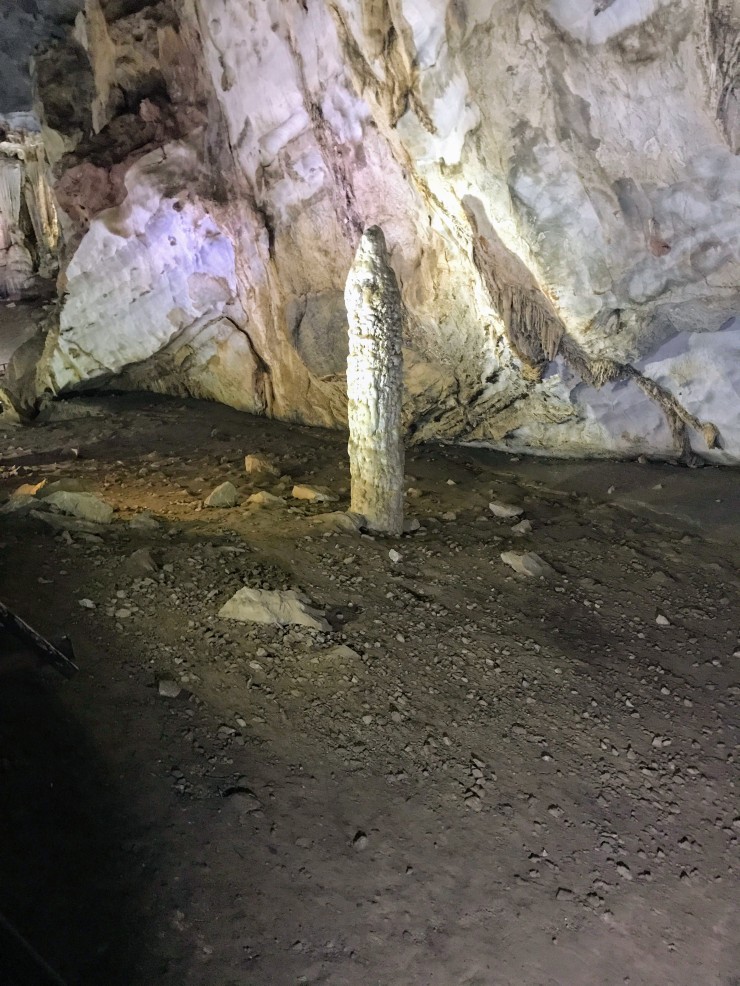 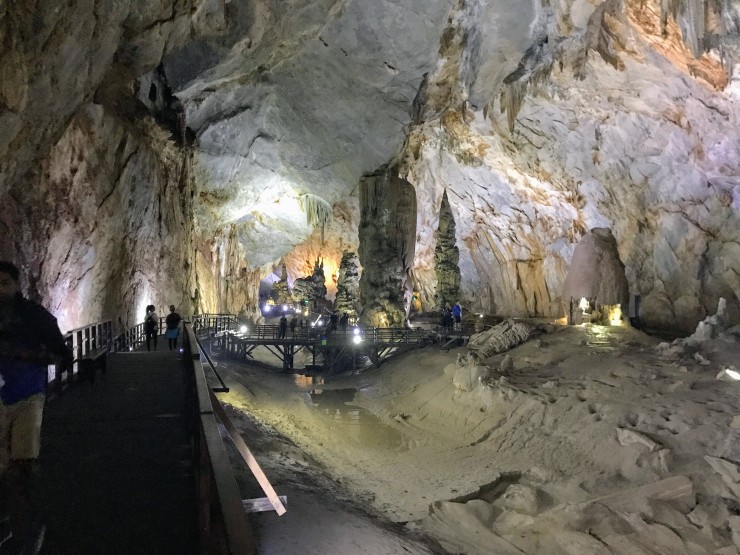 Next we had lunch – I am not going to talk about food anymore as you can just take it as a given that the food was stunning while I am in Vietnam. I sat on a table with a lady from London and a couple of Germans and shared some stories about our time in Vietnam so far.  After that, was a visit to the “dark cave” which is basically another large cave, however, it isn’t illuminated. This was some experience and definitely the highlight of the day for me.

To get to the cave we had to zip line there. The maximum weight to zip line was 90KG. I was starting to feel a bit fat shamed when I weighed in at 92KG but they let me off. After the zip line we had to swim through freezing cold water to get to the cave entrance. After we had swum there the guide met us, having walked along a nice dry path. We were then in the dark cave and we had helmets on with headlamps to guide the way. We waded through waist-high water deeper into the cave until we came to a sort of beach. We then walked through a very narrow shaft for a few hundred metres. I was glad I am not claustrophobic and would not recommend the experience if you are. The guide stopped and told us to walk on and then everyone started slipping everywhere and water became mud. We had found our way to the mud bath! The two German tourists started a mud fight and soon everyone was at it throwing mud at each other, one lady got a little annoyed about this. There are no photos of the dark cave experience as we were not allowed to take our camera unless they were waterproof.

After leaving the cave, we kayaked back to the main entrance where our guide was waiting at the restaurant table with a bottle of rum! We each had a few rums and that was the end of the tour.

I have been trying to take it fairly easy on the booze while I am away because drinking too much will be a serious budget buster and I would rather spend that hard saved cash on rewarding experiences, adventures and activities. Also, I don’t want to spend my entire trip with a hangover. I mean I am in my thirties so I am not really here to have a mad party and whilst I do still love a beer, I am maybe a little bit past partying with the gap year backpackers! I actually want to try and get healthy while I am away and heal some of the harm a sedentary, office based lifestyle has done to my body.

Apart from the one night on Halong Bay, I had just been enjoying a few beers here and there and having regular days off. My general goal is to not get so drunk that I have a hangover – if I do drink just get a little tipsy and still be functional the next day.

We got back to the hostel at 5.00PM and after the few rums I fell asleep for an hour. When I woke up, I headed out for dinner and then I made my way to a place called the Jungle Pub where I had told a couple of English guys, Karl and Jack, who I had met on the tour that I would meet them for a drink. They were on a long holiday travelling through Vietnam and Cambodia. At the bar, they gave me a good tip about motorcycling the Hai Van Pass. They had an early start so after a few beers and when the live music started they left, I told them I might see them in Hoi An where they were also headed. The party was really starting to get going then as you can see from this video (apologies for the funny angle)

I met a few cool Spanish guys and when the bar closed at 11PM, they told me about a nightclub down the road, so I went along with them. In the nightclub, I bumped into the guy from Israel who I had met in Sapa and who had stayed at the homestay with me. And that was that – after a ridiculous quantity of vodka cokes, buckets and shots later, I stumbled home at 4.00AM although the last couple of hours were a bit of a blur.

The next day I went down to the reception and I could immediately tell that the lady was not very pleased. Firstly, she said I had been singing when I came back to the hotel – not in my room but walking along the road to the entrance and this had woken up one of the guests who had complained. Secondly, she said I had tried to use my key to get into the room next to me by accident. I did very vaguely remember trying to get into the wrong room – well the hallway was dark! Apparently the lady in that room, who had since checked out, had felt quite scared. I felt terrible and apologised profusely, she did have a little smile on her in the end but I felt like she must have thought I was one of those stereotypical Western lager louts.

I cancelled the 3PM bus to Hue I was supposed to be on and re-booked it for 7AM the next day, booked in another night at the hotel (wasn’t sure they were going to let me!) and spent the whole day nursing an awful hangover. I was pretty annoyed at myself for getting so hammered but this has now strengthened my resolve to take it easy in future starting with a few days off! On the bright side, I did meet some cool people and had a laugh.

Anyway, that was Phong Nha-Ke Bang – lovely area and definitely worth a stop over on the Vietnam route. They have a good pub there too

Well I think I have had my fix of caves, trekking and tours. Time to get down to the coast for some sunshine, a beach and maybe a motorbike adventure.

Next Stop: Hue and then hopefully motorbike the Hai Van Pass to Hoi An (the “Top Gear Experience”)

2 thoughts on “Giant caves and a few too many in Phong Nha-Ke Bang National Park!”